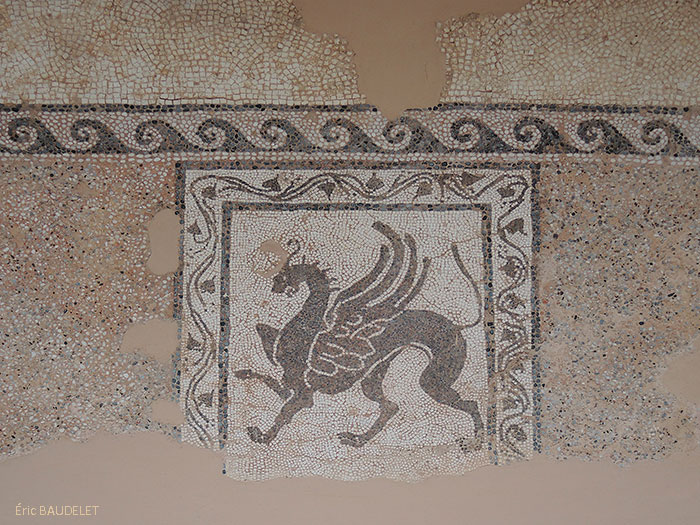 Part of mosaic with a griffin-lion
From the rhodian acropolis.
Preserved is a small part from the border of an andron floor with the entrance panel depicting a Griffin, a fabulous creature in the shape of a lion with the head and wings of an eagle - here the head is also that of a lion.
The winged beast is set off on a white background, framed by a winding ivy scroll.
This mosaic has been made with artificial tesserae (stone cut into small cubic pieces), set in mortar.
This a new technique, which was invented around the mid 3rd c. BC; because of its pictorial possibilities it presented, the new technique developed rapidly, gradually supplanting the old technique using natural pebbles.
The main panel frame of artificial white tesserae, was bordered with narrow spiral wavebands, made of natural pebbles.
This fragmentary mosaic floor, dating in the 2nd half of 3rd century BC - 1st half of 2nd c. BC, is very significant, since it represents the passage from the old technique of natural pebbles to the new technique of the cut tesserae (opus tessellatum)
Pas encore noté(e)